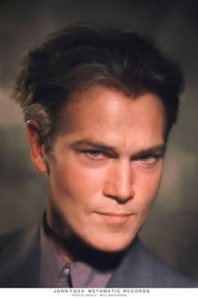 The Quiet Man in Italy in June…

John Foxx will be performing sections from his ongoing Quiet Man novel at the Genoa International Poetry Festival in Italy on Saturday the 21st of June, 2008.

Since 1983 the Circolo dei Viaggiatori nel Tempo (CVT) have organised several events in the fields of literature, poetry, visual arts and music. During the last thirteen years, its international activity has increased in importance and in significance. After the success of the Genoa International Poetry Festival, that every year invite the most known authors and the best young poets and performers, several European cities and regions (Paris, Helsinki, Lille, Munich, Brugge among the others) have asked the CVT to organise similar literary and poetry events.

The Genoa Poetry Festival, which started in 1995, is now considered the biggest poetry event in Italy and one of the most important in Europe.

John’s performance is scheduled to start at 21:00 on Saturday the 21st of June. Admission is Free.